Seeing Indy for Under $200 a Night

Dear John,
I spent the morning doing general housework and the afternoon mediating between the cat and the dog. They did fine when I was gone yesterday, so they probably don't need as much mediating as I feel like they do. Hunter has learned to use his feet and claws, and occasionally initiates things. And sometimes he licks the end of Jethro's nose. It really is adorable. Jethro can look ferocious, but the cat never even hisses or spits at him anymore, so I suppose he doesn't feel threatened. And as to Hunter, he is little but he is fierce. And for some reason this play has to happen in my lap, especially when I'm working on the laptop.
I pretended I was you last night. I was on line looking for hotels for my trip next week, taking Dick and Esther to Indy for his appointment at IU. They'd been told that a hotel near IU would be $200 a night. That's true, but there's no earthly reason to say near IU. I did learn my way around Indy last winter, so I found a list of hotels under $50 and less than 15 minutes out, and they were thrilled. You always enjoyed planning trips on line. It was probably connected somehow to reading the atlas in the bathroom. I certainly benefited from both hobbies. And I was reminded of what a good deal we got since you were an IU patient - that discount, with the weekly rate, ended up saving us about $30 a night.
I remember the time in Indy with fondness. That was the last time I was happy - until the last day when you got bronchitis, and the oxygen company left us with without oxygen in the middle of the night because I wouldn't agree to use them instead of Goshen Home Medical after we got home. That was ugly. And it was just a few days after we got home that you were entubated and I never heard your voice again. So Indy is a precious memory for me. Everybody was so nice to us at Methodist, too. The nurses let me do all kinds of things for you, the doctors treated me like a nurse instead of a wife and let me into the cath lab during your first cath, the cath lab people kept giving me free meals since you were down there four times in one week, and the cafeteria people kept offering to let me charge the bill to my employee ID. Of course, I love big teaching hospitals and feel quite at home in them - the second day you were there, I was downstairs giving directions to another family. And the greatest gift of all was when Jill took me home with her when all the hotels were booked for the Super Bowl - that was a kindness that I'll never forget. And we had a wonderful time and ate cupcakes and got very little sleep! I was quite willing to bunk in your room for the week, but it was much better not to have to.
I don't know how it will feel to go back to Indy next week. It's almost the same date - exactly a week earlier than when we went down last year. I wish the appointment was at Methodist, because I know it so well, but I don't know if that would really be good or not. I'll let you know how it all is emotionally for me. I know I'll miss you - I do that all the time. And I wish I had time to get together with Jill, but all my time will be taken up. 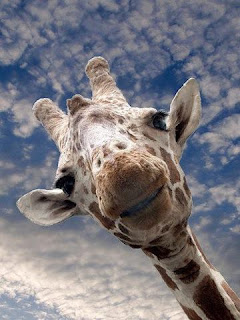 I just had to attach this photo for you to see - it's what I'd like to do, just stick my head in and say hi. And my letters have been so depressing lately, that I thought you deserved something cheerful for a change. So here's something cheerful to look at!
I love you so very much - hurry the day that I can say hello!
Joan.

PS - I wanted to add the giraffe, but Blogger won't let me tonight. I re-started the computer, and it still won't let me. I'll try again tomorrow. So for tonight, just imagine a big, friendly-looking giraffe peering pleasantly at you. Love you!

PPS - It's Saturday morning, and you'd never believe what I had to go through to get this for you to see! Evidently, Blogger has changed the sources you can upload from. You can't upload directly from your computer anymore. You have to set up an account with Picasa, set up a Picasa Web account, shut down all the functions except storing photos, upload photos from your file into it, then move them from there onto the blog.. It's ridiculous. But please enjoy the giraffe!﻿
Posted by Joan Lattimore Hockman at 9:57 PM