Dear John,
In the parlance of our youth: I'm mad as hell and I'm not going to take it anymore. In the slightly looser parlance of Doonesbury: Send black arm band and gas mask; the revolution lives. This is the planet's notification that I've been pushed past my limits. I am reverting to my hippie past and going off the grid. Gastronomically, that is. 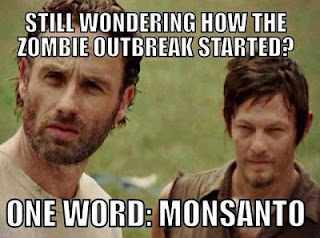 I assume you're up on the news - GMOs, Monsanto, the big agricultural bill with that one provision in it that protects big food manufacturers. (And to think that Mama once cried because I didn't believe that the government always had our best interests at heart.) I'm going off of factory-produced food. I've opted out of the industry that is knowingly feeding me poisons that are banned in other countries.
So I joined the food co-op in Goshen today. Everything is organic and most is local. (Think Wellspring here. That's one thing I miss about Durham.) I'm already making my own cleaning products, weed killer, and pest remedies. I'll finish some of the food I have, but some is going to get tossed. I'm ticked. And determined, and stubborn.
And outraged - that's the word - outraged. And mad as hell. And not going to take it anymore  I'm willing to go to jail for drinking raw milk. When the zombie apocalypse comes I won't be surprised. And I won't be able to sue Monsanto over it because of that agricultural bill. What's the point of a zombie outbreak without lawsuits? (sung, or course, to What's the Point of a Revolution, from Marat/Sade.)
Thanks for listening. I'll keep you posted. You've seen me reach this point before - I'm generally a peaceable creature, but there are lines in the sand that you don't cross. Industrial food just bulldozed my beach. And I'll keep an eye out for zombies.
Love you for loving me even when I'm foaming at the mouth and completely unlovable,
Joan.

P.S. - It's 2 A.M. - after the settlement of the Possum Crisis - and I'm realizing that I wouldn't have believed a year ago that I could get so worked up about something. I didn't think I'd ever care enough about anything again, to be able to get worked up like this. So I suppose my outrage is symptomatic of some degree of health, or improvement, or healing, or some such word denoting improvement, or at least something positive. And the other thing in my mind is that you always said you wanted an independent, strong-minded, smart-mouthed woman. I don't look like I did 38 years ago. But some things haven't changed a bit, have they?  Love you!
﻿
Posted by Joan Lattimore Hockman at 9:36 PM