And the Flies Died of Happiness

﻿Dear John,
Happy 4th of July! I've had a good day, but it's early yet - the fireworks will start in about two hours. The dog is already freaked out by the noise that's gone on all day. I'll let you know how it goes, but I expect it to be ugly. 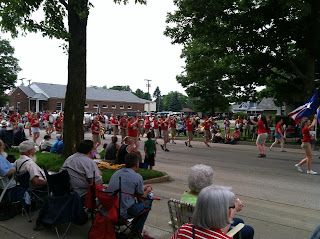 Janice and I went and ate pancakes this morning. I had one of those where-am-I-and-how-did-I-get-here moments at the fire station. I was talking to Dee, looked behind her at the names on the firemen's lockers, and realized that I know all of them. It's one of those small-town things that I didn't grow up with. And that's why I pray for everybody's safety every time I hear the sirens start.
I came home for a while and went back down an hour or so before the parade. I grabbed a pork burger and Coke at the Lion's Club tent as I went by. (I know I'll be awake all night after drinking the Coke, but I don't care. It's a holiday. That's why God made Benadryl.) I did get to see a bunch of people from Topeka Mennonite, which was very good. And the parade was great, as always. I love it so much because it's so Topeka.  I didn't grow up with all these special small-town things, and I enjoy them so much. All the area police and fire departments were there, and the high school band, some political candidates, some churches, some old farm vehicles and cars, and the usual miscellany.
I walked down to the park after the parade, where a community band was playing patriotic music. (I feel like Indiana Jones here - why does it always have to be The Battle Hymn of the Republic? Like every Southerner, I despise it and don't like having my nose rubbed in it. Anyway.) Eventually I got an ice cream cone at Tiffany's and walked home, where the dog was hysterical and hiding in the closet.
I remember a July 4th Erma Bombeck column from the early 1980s. She pointed out that most countries celebrate this kind of event with parades of military equipment and shows of power. But we have cook-outs and picnics where the potato salad gets iffy and the flies die of happiness. And she's right, especially in small towns like this. And I love it. Here, we celebrate what the day is really about.
Well, it's still daylight but there's an oldies group playing at the park and some folks are shooting off fireworks, and the dog is behind me and climbing up and over my back. And it doesn't feel very good. So I think I'd better make room for him in my lap. I did miss you  today, and everybody was very kind to me and concerned about whether I was really okay. But it's been a wonderful day, and for me, also a celebration of being here. Again, thank you for bringing me to Topeka. In fact, thank you for everything.
Love you more than life,
Joan.

P.S. - It's 11:20, and I'm piled up in the bed with exhausted critters. The fireworks were lovely. I gave the dog all the Benadryl I had. But sadly, that was only 12.5 mg. (Yes, I put it on the grocery list.) He found the traditional dog-spot during the town fireworks - behind/under my chair. He's finally getting sleepy, but he still has to be cuddled up next to me. The cat, on the other hand, watched the fireworks from the windowsill. The town is still awake and partying, and it's good to hear. A good time was had by all except Jethro. Good night, and sleep well!