There'll Be a Hot Time In Old Town To(morrow) Night

Dear John,
It's been a long day - worked until 6:30 and then went to Bekka's for a jewelry party. I had a wonderful time and didn't get home until 9:30. I'd left a light on for the animals, but the fireworks had started around the area. So the dog was hysterical and the cat seemed relieved that the dog finally had a designated driver.
Tomorrow is the 4th, and you know what that mean around here! Harold is working the pancake breakfast, so Janice and I are going together, which will be lots of fun. It's changed some - it's now a fundraiser for the fire department instead of Dollars for Scholars, and it's held at the fire station instead of at Tiffany's I remember the years that you worked it, and how glad they were to get your management experience! The only downside was that I didn't get to go. But I'll be there in the morning, probably with minimal sleep. But animals and firecrackers are to blame for that. 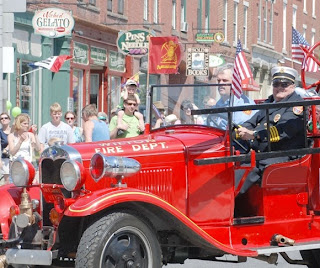 I'll wander around some after breakfast, not sure what I'll go to and what I won't. But I will be at the parade, sitting on the church steps like we used to, with lots of people from Topeka Mennonite, which will be good. It will be the first time I've seen some of them since you died. Last year I didn't feel up to any of this, and it was 105 in the shade anyway. Tomorrow will be in the upper 70s. The only drawback is the 30% chance of storms through the day.
And then the town fireworks will be at 10:00. It will be good just to have them this year, after last year's drought cancelled them. The best view for that is our back yard, so I'll be there. I've invited a good bit of the neighborhood to join me if they'd like to. The only thing I know for sure is that I will have Jethro in my lap for the duration.
Speaking of drought, we're still getting some rain every day. A few weeks ago we were wondering if the corn had a chance of reaching knee-high by the 4th of July. Well, thanks to all that rain, most of it is head-high on me. It's amazing corn - tall, thick, leaves straight, perfect. The beans look good, too, and the winter wheat is ripening. It's definitely July.
I'll miss you tomorrow. We did the town celebration every year except the last two. In 2011 I couldn't get around much because of my collarbone, and you weren't on Bumex yet so you were having trouble breathing. Last year we've already discussed. This year, some things will be harder than others. Unfortunately, I won't know which things until I get out and do them!
So I'll be out there tomorrow, and will report back to you and tell you all about it. It won't be just you that's missing - Ann and Willie are gone now, too. Parts of this will seem strange. But everything does now, so that's no different anyway. Let's celebrate!

Love you so very much,
Joan.﻿
Posted by Joan Lattimore Hockman at 1:23 AM