It's Not the Years, It's the Mileage

Dear John,
I've been sad all day. There's no particular reason. But I am anyway.
There's a commercial on television now for a thing called Lifestyle Lifts. It seems to be some kind of cosmetic surgery. Debbie Boone is spokeswoman for it. I mute it when I can. I saw it once last week when, for some reason I don't remember, I couldn't mute it. And It got me rummaging around in the back of my head. 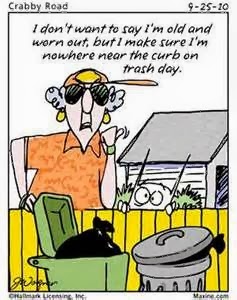 The ad says something about wanting to look the age you feel and not the age you are. As you know, my self-concept got stuck at 35. Twenty years later, I still thought of myself as 35. A couple of years ago I'd go to places and look around and think that all the people there were old, then I'd realize that they were all my age. I sounded like my grandmother - at 93 and the oldest in her nursing home, she complained about being around so many "old people." And Daddy did the same thing after he moved into the senior citizen apartment building. So I was being true to my genetic background.
I was. When I saw that commercial, I realized that I feel about 75. I think it's because that's the age that I think of when I think of widows. My self-concept was twenty years behind; now it's twenty years ahead. I seem to be having an identity crisis of sorts. I don't know that there's anything to do about this other than let it work itself out. It's just an odd thing to realize and note. And it's probably a good thing to be aware of.

Any advice is welcome. I find it startling but not alarming. I'm probably being normal again. I should ask the WFFs if this has happened to anybody else. Maybe, like Indiana Jones said, it's not the years but the mileage.

Glad I traveled those miles with you,
Joan.
﻿
Posted by Joan Lattimore Hockman at 9:10 PM