Where There's Nothing to Scare the Dogs

Dear John,
The storms did get here last night. Jethro jumped on my head and woke me up at 1:20 this morning. It all went through in a little over an hour. After the thunder and lightening were past, I persuaded the dog to lie down between my head and the headboard and go back to sleep. I can't stretch my legs out when we're in that configuration, but at least he's off of my face and I can breathe.
There was no damage here at home and minor damage in town, but LaGrange was hit hard. About an hour ago it was confirmed that a tornado did touch down west of town on US 20 and followed the road into the center of town. The main bank office was closed today, which caused all kinds of wrinkles for us at work, and they may not be back up until Saturday. There was a lot of scattered damage throughout the area, lots of trees down, a few barns destroyed, a wall taken off of a school, and one person killed when a tree fell on a mobile home. And there are a lot of people without power. 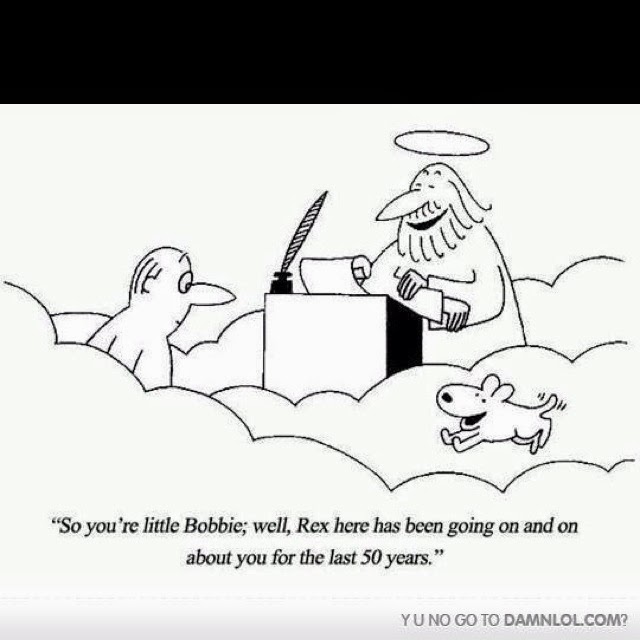 Our electricity went off twice and came back on, thanks to the fact that Topeka has lines to both substations. The cats were fine until the power went off. And it wasn't the power going off that scared them - after all, it was after 1 AM and there were no lights on. You know that light we have plugged into the hall  outlet that comes on when the power goes out? That's what frightened them; it was that light coming on all of a sudden. Until then they were in the windowsills watching the storm like their mother. As soon as that light came on, they were up in the bed with Jethro and me. So we all huddled together until the storm passed.

Anyway, your little family weathered the storm just fine. There were no warnings issued so we all stayed in bed. I'm heading to bed soon and hoping for a better night's sleep. We're all ready for a peaceful night.

I know your night will be peaceful. But it probably isn't night, is it? You live in never-ending day, with no thunder storms or snow storms or tornadoes. There's nothing to scare the dogs, which is good since all dogs go to Heaven.