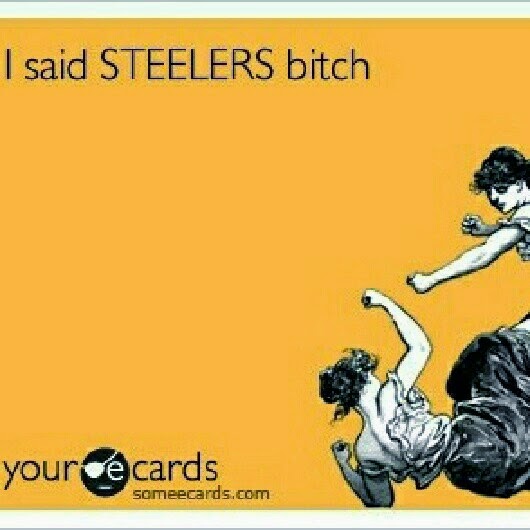 I'm wearing my Polamalu jersey and watching my Steelers beat your Browns - all that's missing is you. The Steelers were up 27-3 at the half and it wasn't really that close. Sadly, the Browns offense has shown up for the second half and just scored their second touchdown, to make it 27-17. So there's hope for you and I am a bit concerned.
I'm taking a fibro day. I got up for church, and was so exhausted that I sat down and cried. So I stayed home. I don't quite know how to manage this. My body seems to need one day a week to go down, stay home, and do nothing much. Some weeks I can do that on a day other than a Sunday, but sometimes I can't. This week my other day off was Thursday, and I had a doctor's appointment in South Bend. I try to do chores on the day that I work my half-day and on Sunday afternoon, but sometimes that isn't possible, especially during mowing season. I need and want to go to church, but sometimes I just can't do it.
I really can't complain. It's amazing, with the fibro, that I can work full-time at all. I'm getting by with my income as it is, but I can't manage with less that full-time pay and benefits. I suppose I just take it one week at a time and juggle things the best that I can, and continue to learn to pay no attention to what other people think. Even without you here to supervise me, I am respecting my limits. I can't afford the consequences of ignoring them. The animals are delighted to have me at home. I sat in the bed for Psalms, prayers, and Facebook this morning, and all four took a turn snuggling in my lap.
Notre Dame won 36-0 last night. It would have been 37 except that the last 6 points were a touchdown on an interception as the clock ran out, so there was no point-after. I won't know until I've seen them against another good team if they are that good, Michigan is that bad, or both. But the game was great fun to watch.
I'm having a lovely weekend - Kentucky-Ohio and Notre Dame-Michigan on Saturday, Pittsburgh-Cleveland and Colts-Broncos today. And Thursday night we'll have Pittsburgh-Baltimore, the hated Ravens who shouldn't exist. I will be happily overdosed by the time Jim and Irene get here next weekend. If you can arrange a visit, next weekend would be perfect. Your sister really misses you, especially now that your mom is gone. She and I are both only children now. And I hate to nag, but you never did text me your phone number. You can wait until after the game, if you're busy watching it. But you probably have much better things to do, don't you? I can watch for both of us. But the concept of Heaven without football seems to be a bit of an oxymoron.
Go, Steelers!
Joan.

PS - In case you missed it, the Steelers just won 30-27. Your Browns tied it in the second half and didn't allow any Steeler points, until a field goal as the clock ran down at the end of the fourth quarter. I'm glad my Steelers won and sorry your Browns lost. They looked great in the second half, so you may have some hope this season. I know - with the Browns it's always a rebuilding year. But they have a new coach, so we'll see. And I'll cheer for them against everybody else! It was always so much fun to watch this game together, and I missed you today, but the game and the memories were great. I love you so very much!

PPS - You know I said I'd be watching more X-Files re-runs? I just watched "Jose Chung's 'From Outer Space'." We loved that one, and I still do. It's brilliant and funny. Again, the only thing missing was you. Remember, it's got to be the planet Venus. :)

PPPS - There's just no getting away from me today, is there? I'm watching the Colts and Broncos now. It's past my bedtime and I'm working tomorrow, so I don't know how long I'll hold out. I sat down expecting to cheer for the Colts, but I can't do it. I'm not exactly cheering for the Broncos, either. I'm really cheering for Payton Manning. I just can't help it. I wouldn't be sleeping now anyway, since I seem to have developed some kind of tummy ache. Too much football in one weekend, you ask? Impossible. There is no such thing as too much football. As I frequently told you, I'm so glad I married a man who liked sports. Anybody but you would have been a perennial football widower. The doors are open, if you can come by for the rest of the game! ﻿
Posted by Joan Lattimore Hockman at 3:42 PM