How I Didn't Die Last Night, Either

Dear John,
I survived another assassination attempt last night or, rather, early this morning. That's two in less that eight hours. I await number three.
Jethro tired to kill me last night. He woke me up at 1 AM wanting to go out. After about twenty minutes I went to call him in, and he wouldn't come - very rare for him. So I put on my slippers and bathrobe, got a flashlight, and went outside hoping he hadn't found another foundling kitten or rendered another possum inert. It turned out he was hearing another dog bark in the distance; the conversation must have been absorbing.
So I grabbed his collar and started dragging the unwilling, uncooperative animal toward the back door. About halfway to the house he cut in front of me, and I fell down flat in the middle of the back yard. At least it was 1:30 in the morning and there was nobody watching. I got up, dragged him the rest of the way inside, and disciplined him appropriately. 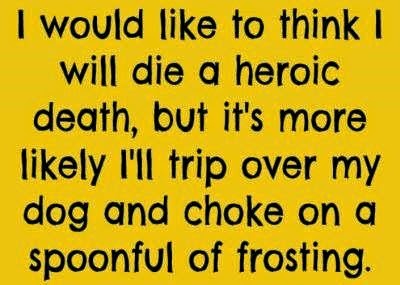 I have confirmed that it is much better to fall on dirt and grass than on a concrete slab with indoor-outdoor carpet glued to it. All I got from it is some sore, bruised ribs on my right side. I know none are cracked because I've done that before - I can cough without screaming, so the bones are undamaged. I don't know if the bruises are from hitting the dog or the ground. Jethro isn't talking about the incident. I'm taking naproxen. And tonight I'm taking Benadryl because I always sleep on my right side and that's the one that hurts.
I've been tired all day, since I was up from 1:00 to 2:30 this morning, but fine other than that and the sore ribs. Work was slow, even for a Tuesday. That was probably a good thing for my ribs. The people at work think I need remedial walking lessons and I do believe they are right. My fine-motor coordination is excellent; I never did get the big-muscle thing down. It could have been worse - at least there was no frosting involved. :)