Have You Seen Me?

Dear John,
I'm having the strangest medical issue. You won't believe this one.
After the biopsy, the mammo people told me to call my doctor if I hadn't heard results from them by Tuesday. Today was Wednesday, a week from the biopsy, so I called. They said they hadn't gotten any results from the mammo people and said they'd call them and get back to me. After waiting a couple of hours, I called the mammo people myself. And - get this - they couldn't find any record of my biopsy.
I know I had it done. I can show them the steri-strips if they'd like. And I have the titanium chip they implanted. And the bill. It really was done. They're looking into it. I hope they eventually find it. They removed all of it 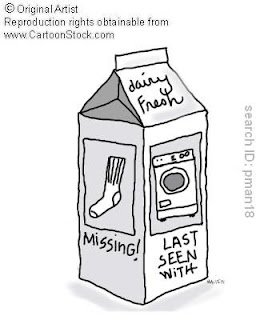 , so there's nothing left to re-biopsy.

This, of course, reminds me of the debacle surrounding your lung biopsy in 2011, the one that was supposed to pin down the genetic variation you had so that chemo could be tailored to it. The mass was in a very vascular area of the lung - they hit a rather large blood vessel - you ended up getting your lung drained and two units of packed cells - and we waited for the results. And waited. And kept waiting. After six weeks of waiting, we finally found out that the sample they took was too bloody to send and there was no biopsy done. Lack of communication delayed your chemo a month and a half.
It ended up not mattering, because it wasn't the cancer that killed you. It was the damage done by radiation for the first cancer when you were nineteen. If that had not been the case, I would have involved lawyers. I hope this lost biopsy is settled in less that six weeks. It's so unbelievable that it's funny. If they can't find it, I suppose we'd go to a PET scan next. And they'll eat the cost.
I'll keep you posted on my missing biopsy. Maybe we should put it on the side of a milk carton. And now I'm remembering Crow's Halloween costume of MST3K. I'll take that into consideration!
Missing but not entirely lost,
Joan.
Posted by Joan Lattimore Hockman at 10:37 PM